Las Vegas plays its next ace in distribution

Industrial real estate is booming in Las Vegas with short transit times west of the Mississippi River and a business-friendly tax structure.

Gaming and resorts are among the top industries in the greater Las Vegas region, but logistics and manufacturing are starting to run the table.

"We're being seen more and more as a community versus just a gaming or a hospitality destination," said Perry Ursem, vice president of business retention and expansion for the Las Vegas Global Economic Alliance, the regional development authority.

Of the 3 million residents of Nevada, 2.3 million are clustered in the Southern Nevada region, which includes Las Vegas, North Las Vegas, Henderson and Clark County, as well as other nearby cities like Mesquite, Overton and Boulder City. The location of southern Las Vegas makes it well-positioned to serve major regional markets.

Southern Nevada is less than one day’s drive to more than 40 million consumers and five major U.S. ports serving the Pacific Rim, including the largest U.S. seaport in Los Angeles. It's within a two-day delivery for nearly every state west of the Mississippi River.

"For companies looking to service the entire West Coast, we are five hours closer to Northern California and the Pacific-Northwest than Phoenix, for example, and that translates to time and cost savings," said Garrett Toft, an executive vice president with CBRE’s Industrial & Logistics practice in Las Vegas.

More companies are building smaller distribution centers to stage inventory for growing e-commerce operations, as well as looking for a lower cost of doing business. When Kroger was looking for a site for a new distribution center in the southwest, it selected Las Vegas due to economic incentives offered by the state and operating costs comparison that indicate the company "will have lower operating costs in Nevada than other regions in the southwest United States," according to a Clark County development board summary.

The business-friendly tax structure (no personal income tax, no franchise tax, no inventory tax, just to name a few), "right to work" state status, and low cost of freight are some of the drivers behind Las Vegas' growth over the last several years, said Xavier Wasiak, senior vice president at JLL.

Going all in on distribution

Southern Nevada is home to distribution facilities for brands and retailers such as Bed Bath & Beyond, CDW, the Honest Company, Fanatics, Amazon, Levi Strauss and Sephora. In July 2018, the cosmetics retailer broke ground on a 715,000-square-foot distribution center in North Las Vegas to serve stores as well as direct-to-customer shipments. In 2019, Kroger opened a 482,000-square-foot distribution center in Henderson to service its Smith's Food and Drug stores brand in Nevada, New Mexico, Arizona and Utah. The company also uses a 155,000-square-foot warehouse in Las Vegas to support the direct-to-consumer Kroger Ship e-commerce platform.

In Mesquite, Do It Best built a 500,000-square-foot distribution center, which saves the company a million truck miles a year, Ursem said. The city has invested in an industrial park and created incentives for relocating businesses.

"Las Vegas’ industrial market has performed exceptionally well this year as e-commerce, third-party logistics and other distribution users have sought out opportunities for growth," he said.

"We are constrained not by demand, but by supply."

"In 2019, we had near record net absorption and expect similar results in 2020," Hughes said. "We are constrained not by demand, but by supply."

The Southern Nevada towns of Mesquite and North Las Vegas were ranked among the top 25 locations based on operating costs for a warehouse/distribution center in a site survey by The Boyd Company.

While Las Vegas is building its industrial base, there is still room for improvement to serve local businesses. Ira Kaganovsky, founder and CEO of Freedom Deodorant, could find only one local manufacturer — used as a backup to her primary vendors.

"We use them for small runs, last minute stuff," she said. "We try to keep our business local, but Las Vegas is not known for manufacturing."

But manufacturers are beginning to move in. Haas Automation is building a 2.3 million-square-foot manufacturing campus to relocate its operations from Oxnard, California to West Henderson. The company will build and distribute precision machine tools.

“Many companies are leveraging Nevada to balance the increasing operating costs in other locations,” he said.

Doubling down on transportation

Transportation connections to and from the region are good and getting better. To support the growing supply chain sector, the state is investing in major highway links — upgrading U.S. Highway 93 to Phoenix in stretches as funding becomes available. Interstate 15 connects Las Vegas to Los Angeles, and U.S. Highway 95 runs from Canada to Mexico through Nevada. Recent highway projects include widening the southern 215 Beltway and additional improvements along the northern 215 Beltway near Interstate 15.

"The railroads are stepping up to the plate, asking, 'How can we be part of the solution?'"

Union Pacific serves the Las Vegas area and Northern Nevada, which is also connected to BNSF. The Las Vegas Global Economic Alliance is working with consultants from the railroads and the Nevada Department of Transportation to identify sites for rail improvements, such as building a freight rail connection between Las Vegas and the Reno-Carson City area and developing a new rail spur to the Apex Industrial Park in North Las Vegas. The state is supporting private plans to develop intermodal facilities.

"The railroads are stepping up to the plate, asking, 'How can we be part of the solution?'" Ursem said.

McCarran International Airport is among the top 10 busiest in the nation, serving 40 million passengers each year. Airfreight traffic, up to 600,000 pounds a day, moves on airliners. Given Las Vegas' role in the hospitality industry, it's no surprise that two largest inbound airfreight cargos are fresh fish and fresh flowers.

Las Vegas has a Foreign Trade Zone to reduce customs costs for manufacturing and imports/exports, operated by the Las Vegas Global Economic Alliance.

Southern Nevada is close enough to serve California and western markets and use the Ports of Los Angeles and Long Beach for imports and exports.

Las Vegas is a net importer of goods, so there are backhaul opportunities for companies shipping back to major markets. "It creates opportunity for manufacturers to take advantage of that and get their products out of Southern Nevada cost effectively to those respective markets," Ursem said. 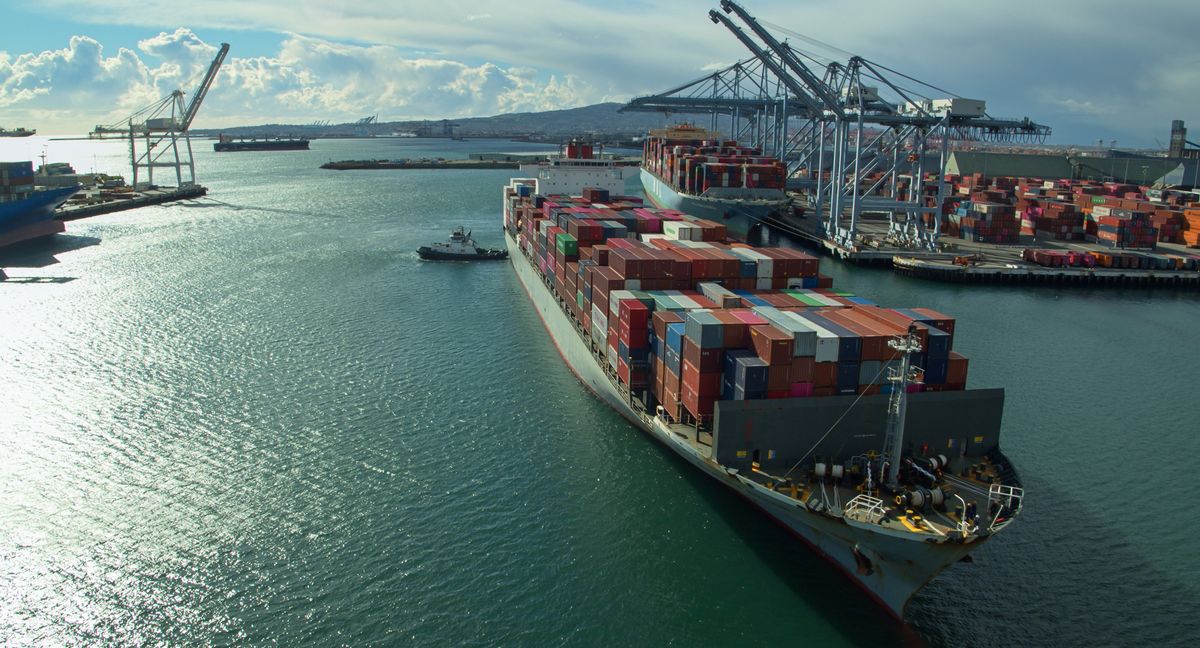