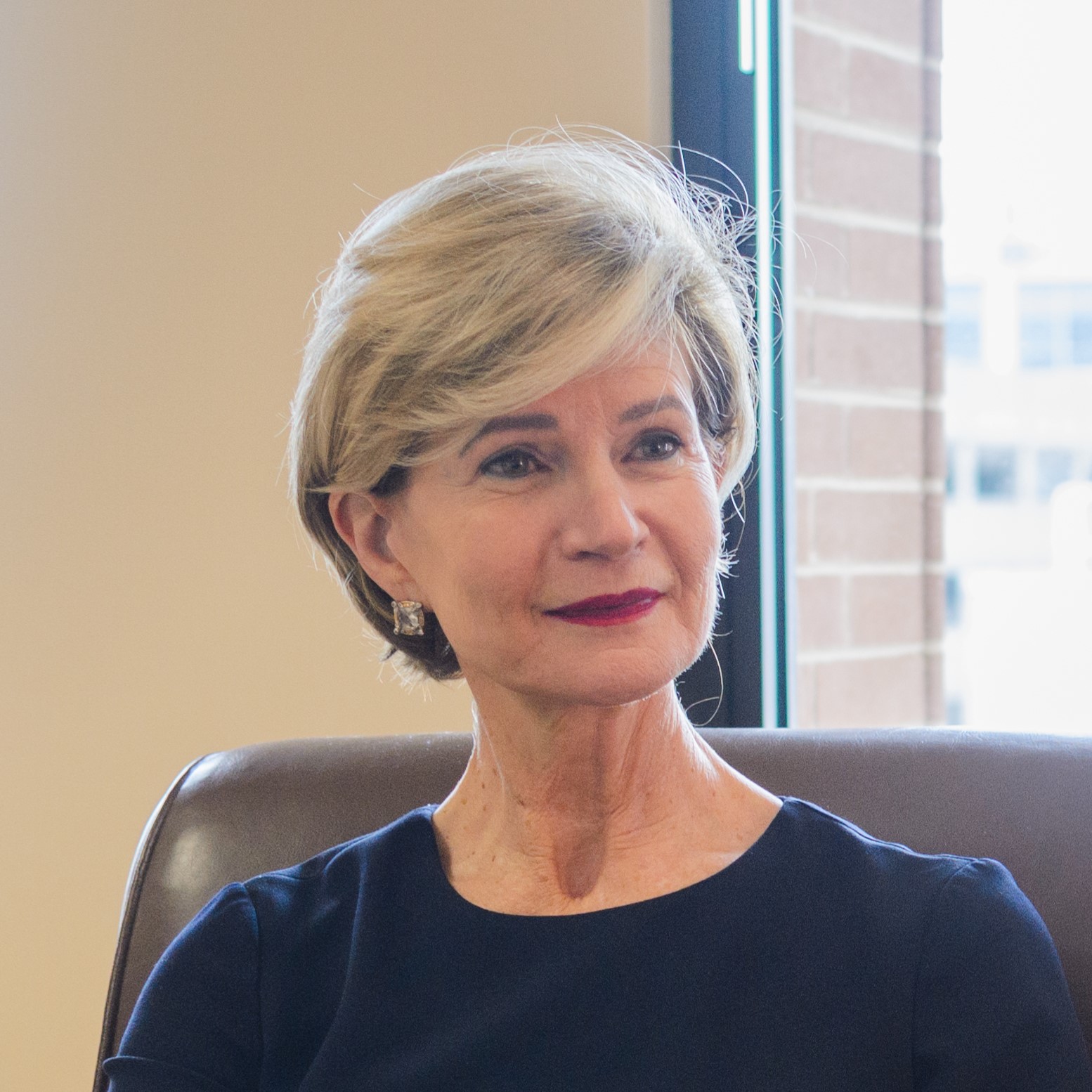 The performance of the supply chain is the backbone of economic competitiveness in the United States.

A career in maritime law:

Before joining the Commission, Dye served the U.S. House of Representatives, the Coast Guard and the Maritime Administration in legal roles.

A love for leadership:

Commissioner Dye frequently speaks to leaders, advising the best way to become better is to read your way to success.

If Rebecca Dye could fix one thing as a U.S. regulator, it would be inefficiencies in the supply chain.

"I want you to think about the time these things are not problems," the Federal Maritime Commissioner told Supply Chain Dive. "You can just do your job and move that cargo, and shippers don’t have to spend so much time trying to get insight into somebody else’s business: just do yours."

It’s aspirational. But Commissioner Dye’s eyes light up when she talks about the potential for supply chain stakeholders to one day be able to see ports and terminals as more than a "black box" — as more than a stopping point or an impenetrable dwell-zone for containers — but an "engine" for the economy.

"The performance of the supply chain is the backbone of economic competitiveness in the United States," she said during an interview. If we could just find a way to make it more efficient, she said, "we would be doing all of ourselves a great, great deal – and the country, as well."

Supply Chain Dive’s award to Rebecca Dye for Regulator of the Year is based on more than dreams. Over the past three years, the Commissioner has proven she is willing to listen to the industry, then act. She sees herself not as a rule-maker, but a "catalyst" for new solutions — and this year, her work has led to significant change.

The Federal Maritime Commission’s (FMC) role has evolved significantly over the past years.

At its core, the independent agency’s key responsibility is to enforce competition in ocean shipping. This means providing oversight over the prices shippers pay for freight services, Dye said. "We are, under that authority, supposed to guard against an unreasonable increase in price or an unreasonable decrease in service."

The way oversight is handled, however, has begun to shift since at least 2014. In the past four years, labor disruptions, bankruptcies and a wave of consolidation in the shipping industry have led service operators at ports to deliver inconsistent customer service, while charging more unilateral fees.

"You can’t really enforce a competition regime without understanding everything."

"Although my approach has not changed, we also have to adapt that to the dynamics of our industry," Dye said. "That has changed."

Now, more than just oversight, the FMC has taken on the role of a counselor for supply chains. The agency does not hear contract disputes. But it has led a series of investigations into the reasons behind the lack of trust or disputes between supply chain stakeholders, in hope of finding solutions.

"You can’t really enforce a competition regime without understanding everything," Dye said. "Because of our business, we have to understand theirs."

The regulator behind port innovation

Commissioner Dye said the idea for broad-based investigations on supply chain efficiency came after a discussion she led at a maritime forum in Copenhagen.

She was to lead a discussion on infrastructure investments. Dye said the group she was assigned had asked to be included in the discussion, so they were interested in the topic. Still, "their body language was very relaxed," she said, motioning back in her chair.

The conversation about infrastructure only lasted 15 minutes.

You can’t really talk about "a phantom, a fantasy port," she said. "I said, ‘Could we, gentlemen, talk about the supply chain?’"

"Body language changed. They instantly sat up, leaned in and somebody said, ‘Of course we have to get rid of the bottlenecks!’ I said, ‘Well, see, that’s the thing right there. That’s the thing," she said.

The discussion in that working group was such a success, the other two groups changed their topics after the coffee break. And Commissioner Dye came back to Washington with a few ideas.

The Federal Maritime Commission, at the time, had just finished a series of forums at ports around the nation. She shared her ideas at a forum in New Orleans, saying she had learned the solutions to supply chain issues were not instant — but rather incremental.

By February 2016, Dye was ready to act on her conversations. The FMC ordered her to form "Supply Chain Innovation Teams that will develop commercial solutions to supply chain challenges and related port congestion concerns."

She would spend the next 18 months on that endeavor.

Bringing the supply chain together

The way Dye tells it, her experience in bringing six innovation teams together to troubleshoot supply chain inefficiencies was really a story in facilitating leadership.

"Somebody doesn’t sit in isolation and say, ‘I’ve got an idea,’" she said. "It’s just building on past success. You have to have people on the team who are leaders. Executives who have a broad base of experience."

Dye said she told her teams not to read anything: They were ready by virtue of past experience. She was "obsessive" about keeping the teams to just five to 12 people. Lastly, she would tell each team to "step out of your silo" and ask them to keep everything confidential.

"So, we get there and you don’t use a whiteboard, you don’t facilitate — this is about focus," Dye said. "I hand out these little cards for the innovation teams. The goal is: Choose one thing that will make the most difference in the supply chain reliability and resilience."

Indeed, after 18 months of research and conversations with these innovation teams, the regulator produced a report on supply chain innovation with six specific recommendations and a vast list of problems. The story would not end there.

From discussion to action

It’s not always easy to point at the results of an investigation or a research project. But the innovation project Dye concluded almost immediately led to two additional projects that would prove significant.

In the innovation report, Commissioner Dye recommended the industry develop a "National Seaport Information Portal" to address the visibility needs of every stakeholder in the industry. She also wrote the teams had decided to pilot test the idea at one port before deploying it nationwide.

The Port of Los Angeles and General Electric partnered this year to develop the pilot. In March 2018, the Port of Long Beach joined in on the project, deploying the portal at its own facility.

That same month, the FMC assigned Commissioner Dye another project — an investigation into the fairness of demurrage and detention fees charged by port service providers to shippers.

Demurrage and detention are a pain point for supply chains because parties have various definitions for two practices: how much "free time" is enough to move the container out of a port terminal; and how a fee should be paid if a party exceeds the allotted time allowed to move the container out of a terminal. If supply chain stakeholders could agree on the same definitions, and then make that information publicly available in a single portal, supply chains could "stop flying blind."

"Because of our business, we have to understand theirs."

"That is one of the things that we are going to highlight in the demurrage and detention investigation because that will solve so many problems," Dye said. "It also will provide shippers that key piece of information that they need for greater supply chain reliability and resilience."

At the time of the interview, Commissioner Dye had just released an interim report with a series of potential solutions to that problem. Next, she planned to travel to New York, California and Florida to talk about the solutions in front of stakeholders and gain more information. This week — barely a year after the innovation project concluded — Commissioner Dye will release her final report on demurrage and detention.

Her philosophy, however, is not to make a rule out of these investigations. She said it’s in the regulator’s power, but she fears the unintended effects over-regulation may have.

"I am firmly convinced that if you go too far, you do not know the consequences. A lighter approach, a light touch, is the best way to start," she said.

A light touch, perhaps — but without a doubt, Rebecca Dye has proven to be a regulatory force, sparking long-needed conversations as a catalyst for innovation within the industry.