The 3 types of transformational leaders in operations

Over the past few years, countless Fortune 50 organizations have undergone radical shifts in their operating strategy.

It could be Kraft-Heinz, looking to merge two of the largest food brands into a global behemoth. Or Kohl’s, rethinking how its stores fit into the modern retail strategy. Either way, today’s supply chains are facing extreme pressures to reinvent themselves.

But what does it take to lead a successful transformation?

Dogged by rising demands for the right-fit leader, and a request from a Fortune 50 company, global search and leadership advisory firm Russell Reynolds Associates sought out to answer this question.

At first, the firm was looking simply for traits to inform future searches — but what it found was a pattern. Great leaders fall neatly into three different types.

The conclusions are based on Russell Reynolds Associates’ analysis of 50 recently-transformed consumer and industrial companies with $20 billion in revenue, the firm’s own previous search data, and a psychometric survey of more than 8,000 C-suite executives interpreted with the help of assessment firm Hogan.

The categories are detailed below and in the firm’s report, “Putting the Horse before the Cart: Finding the Right Transformational Operations Leader.”

Not all leaders are transformational, making the executive search process all the more important when engaging a new strategy. In fact, the report argues, the wrong leader could make a new initiative utterly backfire, turning disruption into “crisis rather than improvement.”

After analyzing thousands of executives’ psychometric data, Hogan and Russell Reynolds Associates found transformation most often succeeds with hires who break the traditional mold of leadership — those who exhibit what may at first seem as competitive traits, such as being both reluctant and risk-taking at once.

These C-suite hires exhibit four simultaneous attributes that define their leadership: Pragmatic disruptors, reluctant risk-takers, vulnerable heroes, and galvanizing connectors, as shown in the chart below.

In addition, all transformational leaders have strong digital and technical expertise as well as cross-functional or global experience prior to joining the new company. 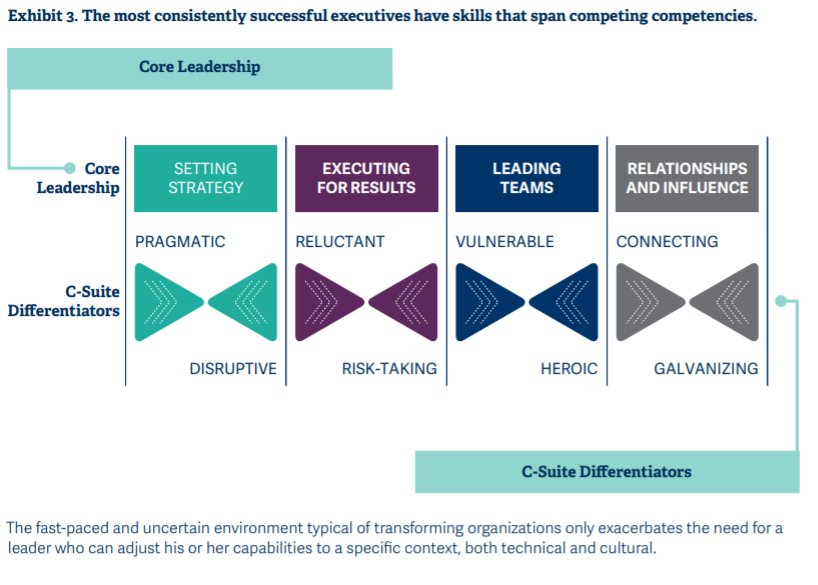 However, in an interview with Supply Chain Dive, Pascal Bécotte, head of the global operations & supply chain officers practice at Russell Reynolds Associates, warns not all transformations are the same.

While a company can start by looking for leaders with the above traits, an executive search for an IT transformation strategy is inherently different than a manufacturing footprint reorganization process. In addition, companies may face distinct personnel considerations based on how disruptive an initiative may be to a company culture.

In these cases, Russell Reynolds Associates found, identifying which of the three types of leaders a candidate is may help identify the best fit.

“What differentiates them is the levers that they will use to be effective," Bécotte said.

This type of leader’s key trait is their ability to obtain buy-in from the entire organization.

They command an “understanding of the end-to-end supply chain” or have held company-wide positions, at times rotating through different functions throughout their career. As such, they can anticipate the “butterfly effect” of disruption — where a shift in one department may have a completely disparate effect in another.

Roughly 43% of leaders assessed by the report fit into this category, with 92% of these having spent 10 or more years with the company they led.

This leader’s strong-point is the ability to “technically solve problems,” nearly without collaboration from the rest of the company, according to Bécotte.

Such hires typically started their career in a technical role and have typically redesigned systems, plants or operations (leading a Six Sigma initiative, for example). This mindset may facilitate tough transformations, where change needs to come quickly or efficiently.

About 36% of assessed leaders were engineers, with 71% having been with the company more than 15 years and 59% boasting international assignments.

This leader “has the very strong benefits of no I-owe-you’s,” said Bécotte.

The freedom to not know anything to the company culture can be essential in bringing a fresh perspective to an initiative, to truly turn an initiative around. They typically also boast an engineering background, but about 58% come from outside the industry or have switched industries within their career.

The firm found 21% of the assessed leaders fit into this category, with 92% having led plant improvements or manufacturing redesigns in their career.

Bécotte tells a story of how it can, at times, be difficult to choose between two highly qualified candidates.

He said one firm that approached Russell Reynolds Associates was debating between two finalists, with one being a stereotypical cross-functional leader and the other an engineer.

He noted it was a tough choice, but the firm hired the cross-functional leader because they sought someone who could build up support for the initiative within the company. But in another case, the engineer may have been the best fit. "In crisis, you often don’t have as much time and luxury in terms of preserving everybody’s ego," he said.

In every case, a hire will be dependent on each company’s sensitivities on size, scope, complexity and urgency of the initiative. But as industries continue to be disrupted by mega-trends — such as e-commerce, Industry 4.0 or artificial intelligence – transformational leadership will beckon with urgency.

As for the report, "what we hope is that the leadership traits necessary will be understood as fast as possible by others so they can end up being on the leading edge, not on the back burner of that transformation," Bécotte said.